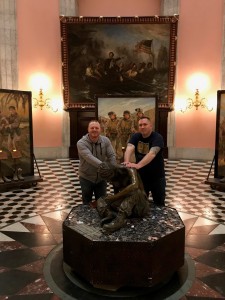 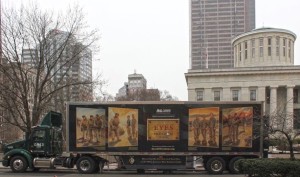 The Eyes of Freedom began in Ohio Statehouse back in 2008 as a living memorial to the fifteen members of Lima Company who lost their lives in an Attack in Afghanistan in 2005. Annita Hill painted life-size portraits of the men. They were placed in a circle in the Rotunda of the Statehouse. The rest is history.

The first week of February the Memorial was once again in the Ohio Statehouse Rotunda. Mike and Sean were with the Memorial as they have been for years. It was the 319 presentation and has been seen in 32 states.

The Memorial will be seen again in Ohio in Marietta the last weekend of March in Cincinnati the last week of May and back in Columbus during Veterans Day week at the Veteran’s Memorial Museum on W. Broad Street.

Mike Strahle is pictured below, received a Purple Heart Medal for his service with the Lima Company.

Be sure to make time to see this moving tribute when it is near you. 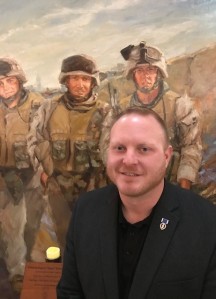