Early in the morning of Saturday, October 13, 2018 members of the Muskingum Chapter climbed the hill at Woodlawn Cemetery to mark the grave of Fanny Russell Brush.  They were led by the Color Guard of the Ohio Society SAR. Colors were presented by SAR Chapters from the Putnam, Marietta and the Franklin Chapters of the SAR.  Led by Steve Frash, the colors were carried by Dan Bebee, Don Miller, and Steve Kelley.  The Bag Piper William Conroy IV is also an SAR member with the Marietta Chapter.

Fanny Russell Brush, DAR #1541, organized the Muskingum Chapter in July 1893 with eleven other women of the County. The meeting was held at the Young Women’s Christian Association building in downtown Zanesville. The 125th Anniversary luncheon was held in the same building, now a restaurant and event place called Bryan’s Place.  A bronze marker recognizing Mrs. Brush was placed on her family headstone. 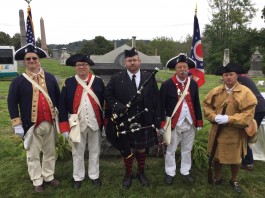